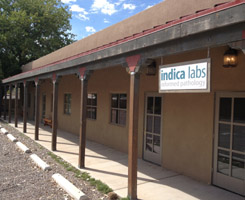 CORRALES, New Mexico- Indica Labs, an industry leading provider of software for quantitative evaluation of digital pathology images, is increasing its staff and has moved into larger headquarters to accommodate the company’s continued expansion.

On the heels of a record year of sales and sales growth, Indica Labs has doubled its software development head-count in the last six months with plans to add several additional developers before the end of 2013. The expansion of the development team has been prompted by increasing demand for HALO, Indica Labs’ next generation image analysis platform.

“We had planned to move our office in 2014, but are thrilled to be able to do this a year earlier.” remarked Steven Hashagen, Indica Labs CEO, “We’ve been consistently cash flow positive for almost two years now, but since the release of our HALO platform last year, we’ve witnessed an explosive growth in both sales and demand.”

Indica Labs has also expanded its global presence in 2013 with the appointment of UK-based Dr. Kate Lillard-Tunstall as Chief Scientific Officer in April. With fifteen years of experience in life science research, digital pathology, and image analysis, Dr. Lillard-Tunstall provides both scientific expertise and a detailed understanding of the needs of life science digital pathology customers.