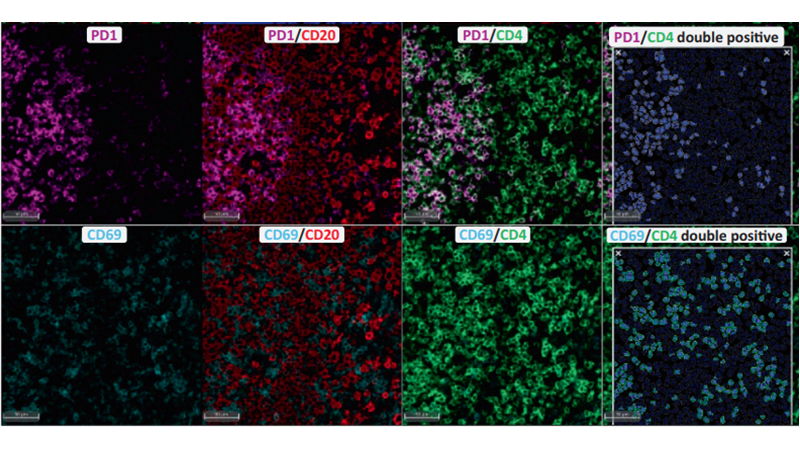 by
Events, Past Webinars

This webinar is ideal for researchers in oncology, immuno-oncology, pathologists, attending physicians, image analysts, and others working in digital pathology.

The development of extranodal marginal zone lymphoma of mucosa-associated lymphoid tissue (MALT) is driven by chronic inflammatory responses and acquired genetic changes.  To investigate its genetic bases, we performed targeted sequencing of 93 genes in 131 MALT lymphomas including 76 from the thyroid.  We found frequent deleterious mutations of TET2 (86%), CD274 (53%), TNFRSF14 (53%) and TNFAIP3 (30%) in thyroid MALT lymphoma.  CD274 was also frequently deleted, together with mutation seen in 68% of cases.  There was a significant association between CD274 mutation/deletion and TNFRSF14 mutation (P=0.001).  CD274 (PD-L1) and TNFRSF14 are ligands for the co-inhibitory receptor PD1 and BTLA on T-helper cells, respectively, their inactivation may free T-cell activities, promoting their help to malignant B-cells.  In support of this, both the proportion of activated T-cells (CD4+CD69+/CD4+) within the proximity of malignant B-cells, and the level of transformed blasts were significantly higher in cases with CD274/TNFRSF14 genetic abnormalities than those without these changes.  Both CD274 and TNFRSF14 genetic changes were significantly associated with Hashimoto’s thyroiditis (P=0.01, P=0.04 respectively), and CD274 mutation/deletion additionally associated with increased erythrocyte sedimentation rate (P=0.0001).  In conclusion, CD274/TNFRSF14 inactivation in thyroid MALT lymphoma B-cells may deregulate their interaction with T-cells, promoting co-stimulations and impairing peripheral tolerance.

He obtained his MB from Hebei Medical College, P.R. China in 1984, and subsequently PhD from King’s College Hospital School of Medicine and Dentistry University of London in 1990. After a three-year postdoctoral fellowship at the Institute of Cancer Research, Sutton, UK, he joined Professor Peter G. Isaacson’s research laboratory at Department of Histopathology, University College London in 1993. In August 2003, he joined the Department of Pathology, University of Cambridge and has been working there since then.

He and his colleagues have made a series of seminal contributions to our current understanding of the molecular pathology of MALT lymphoma, splenic marginal zone lymphoma, diffuse large B-cell lymphoma and angioimmunoblastic T-cell lymphoma. He is a highly cited clinician scientist with over 220 research publications, a Hirsch index of 76 and a total of 20260 citations (September 2021). In 2013, he was awarded the Goudie Lecture and medal by the Pathological Society of Great Britain and Ireland to recognise his research achievements.