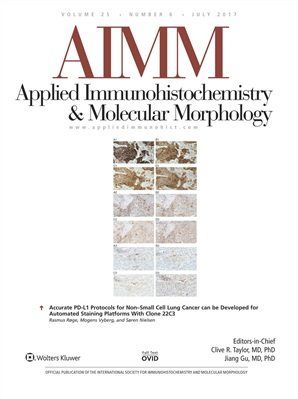 Although availability of automated platforms has proliferated, there is no standard practice for computer-assisted generation of scores for mRNA in situ hybridization (ISH) visualized by brightfield microscopic imaging on tissue sections. To address this systematically, an ISH for peptidylprolyl isomerase B (PPIB) (cyclophilin B) mRNA was optimized and applied to a tissue microarray of archival non–small cell lung carcinoma cases, and then automated image analysis for PPIB was refined across 4 commercially available software platforms. Operator experience and scoring results from ImageScope, HALO, CellMap, and Developer XD were systematically compared with each other and to manual pathologist scoring. Markup images were compared and contrasted for accuracy, the ability of the platform to identify cells, and the ease of visual assessment to determine appropriate interpretation. Comparing weighted scoring approaches using scores (Developer XD, ImageScope, and manual scoring) a correlation was observed (R2 value=0.7955), and association between the remaining 2 approaches (HALO and CellMap) was of similar value. ImageScope showed the highest R2 value in comparison with manual scoring (0.7377). Mean-difference plots showed that HALO produced the highest relative normalized values, suggesting higher relative sensitivity. ImageScope overestimated PPIB ISH signal at the high end of the range scores; however, this tendency was not observed in other platforms. HALO emerged with the highest number of favorable observations, no apparent systematic bias in score generation compared with the other methods, and potentially higher sensitivity to detect ISH. HALO may serve as a tool to empower teams of investigative pathology laboratory scientists to assist pathologists readily with quantitative scoring of ISH.